Ambient, some 80 BPM beats, and some drum & bass. A couple of old tracker mods too. The few new tracks in this hour are by Amy Kisnorbo, Ben Businovski, Legowelt, Ogeon, and Skee Mask.

Walked into town today and picked up some tea at the grocery store and a few movies (on DVD) at the local thrift store. Found the first season of The Expanse, a copy of The Witch (2015), and - the best find - a copy of Doctor X (1932), the two-color version. It was a nice day out, too. Good weather.

Catching up on podcasts this morning and I'm just now getting to Anime World Order #200. Which is over three hours long and mostly comprised of an interview with Helen McCarthy. Been looking forward to this one, glad I have time today to listen to it.

Ambient, dub techno, downtempo, IDM, and some old tracker modules. A weird mash of styles. This mix features a couple new-ish tracks from dbacon and Paul Blackford plus a recent remaster from Brothomstates. 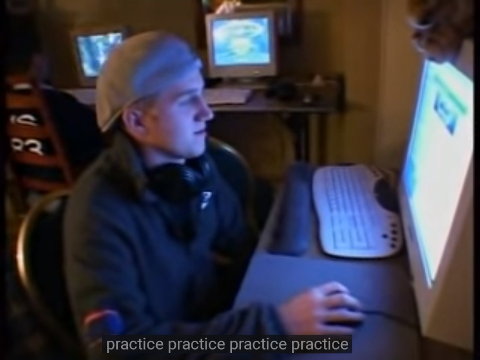 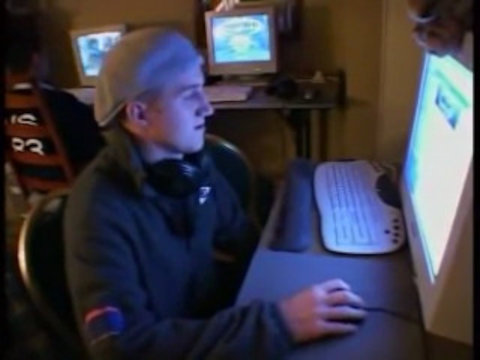 A fun performance of Ennio Morricone's "Bambole" from the Spasmo soundtrack:

I recently switched from keeping a to-do list to taking short notes on what I've done each day. It's not a lot, four or five lines in a composition notebook per day, but it's nice. Makes me feel more "productive".

A couple of behind-the-scenes screenshots, different parts of the mix planning and publishing process.

I should take a new photo of the equipment I'm using. 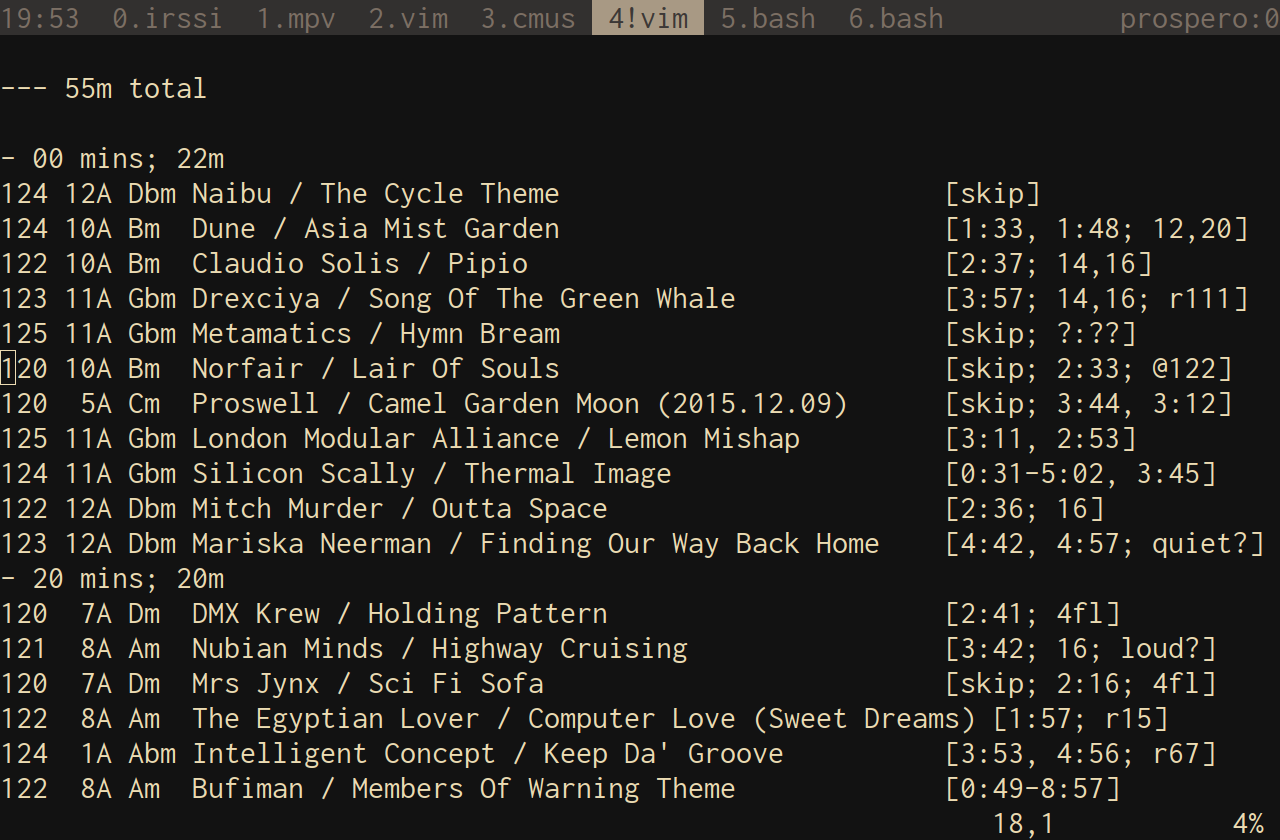 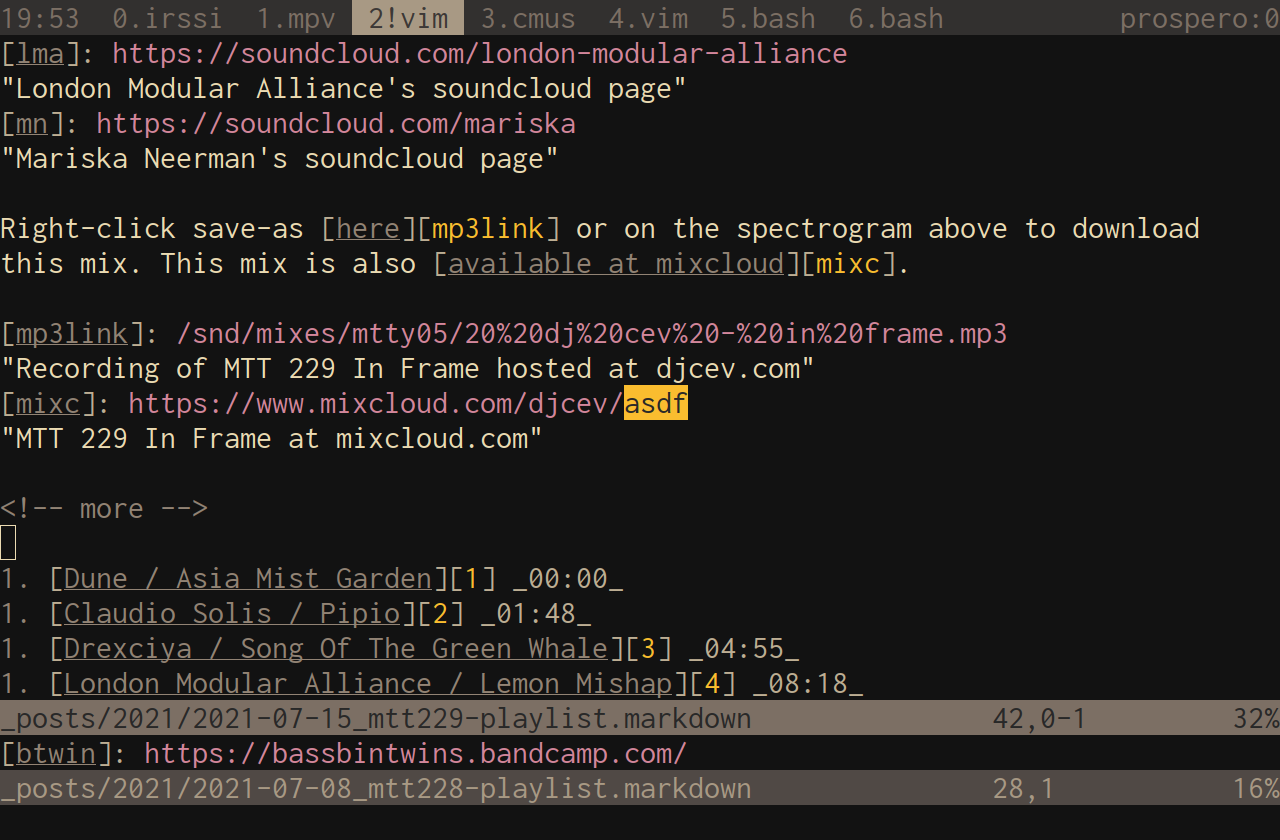 Breaks and electro at ~120, something a bit more relaxed. Features new tracks by Bassbin Twins, Bufiman, London Modular Alliance, and Mariska Neerman, plus a bunch of old favorites by Drexciya, Intelligent Concept, Jega, and more.

More breaks and electro for the middle of July. Wandering through a few different styles and a couple of decades trying to draw connections. This hour features new tracks from the Bassbin Twins, Bufiman, London Modular Alliance, and Mariska Neerman, plus a bunch of old favorites.

Following on from that introduction:

I don't post very often and I keep odd hours. Also I'm pretty slow to act or make decisions. I take my time.

I do sometimes post / promote my own projects and those of friends, but I try not to do so to excess.

I am retiring this account at mastodon.social and will be moving over to @cev@bsd.network .

Hello b.n. (and the wider fediverse). I am a disc jockey, music collector, and lapsed sysadmin from the Portland (Oregon) metropolitan area. I was a regular DJ at Ground Kontrol Arcade in Portland and now produce a mix series for the internet.

I do most of my computing with the BSD variants; I'm using FreeBSD now to write this message and interact with the fediverse.

I've been fooling around with my website a lot in the last few weeks. Not sure why. I guess I'm in the mood to tinker with something. 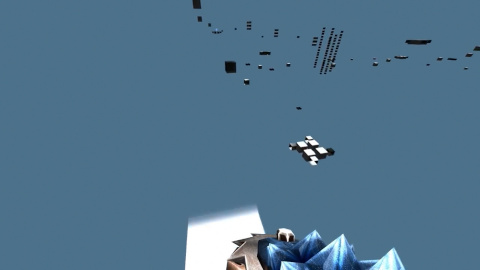 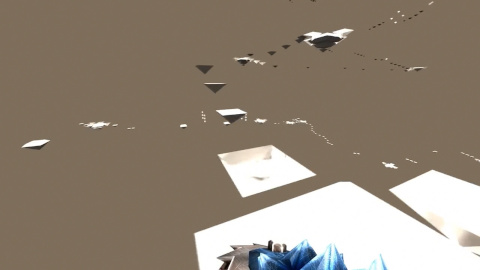 #breaks and #electro up around 130. A couple new tracks from Anz, Bassbin Twins, Delta Funktionen, Overmono, and Scape One, otherwise this one's mostly old dusty files and records.

Breaks and electro, mid-tempo ~130. A bunch of old selections in here, tracks I've been playing for years. Some new ones too from Anz, Bassbin Twins, Delta Funktionen, Overmono, and Scape One.

Spent the night putting together tomorrow's mix. Having a real "what the hell did I just mix" moment right now.

I'm thinking about moving to another mastodon instance. This would be my second move, after going from SDF to mastodon.social. It's been on my to-do list for a while, just haven't gotten to it.

Shopping for instances is hard.

It turns out Audacity runs fine in Wine. i386-wine 5.0.4, Audacity 2.4.2. It takes longer to start than usual and parts of the UI seem slow but I was able to record and edit audio. I'll give it a real test this week.

Posted as a follow-up to my complaining yesterday.

I should run Audacity in Wine at this point. Get a windows build of 2.4.2 and never think about it again. I wonder how well that'd work.

I'm untangling my software upgrade mess from yesterday. FreeBSD now thinks that wxgtk31 requires wayland. And it wants to update Audacity. So...

Tried to upgrade youtube_dl, accidentally started upgrading half the software on my system.