I think my celebration this year will be to fall asleep while watching Horror Of Dracula.

Just had the strange experience of (re)watching Night Of The Living Dead (1968) with commentary by a shark girl vtuber. (Gawr Gura).

Good movie, I still like it anyway. Not sure how many times I've seen it but I got a lot out of it this time.

A lot of this particular mix (#296) is sourced from the Restless Dreams: A Tribute To Silent Hill compilation on No Problema Tapes. It's an uneven comp on the whole I think, but it has some very good pieces & is worth flipping through if you like dark ambient (and/or Silent Hill).

Ambient & vaporwave music to close out October 2022. This mix features 7 (!) tracks from the Restless Dreams: A Tribute To Silent Hill compilation on No Problema Tapes as well as a particularly long piece by Scarletron near the end.

I moved my record & book shelves a small distance yesterday and now I'm paying for it. Sore all over. Had to remove everything from the shelves, move them, then put everything back. It took hours.

#electro (and other) at ~120 BPM this week, sliding from a syncopated to a more normal four-on-the-floor beat. This #djmix features music by Barking, Champagne Mirrors, Photodementia, Nancy Fortune, Shadowbunny, Weith, and more.

Electro (& other) at 120 this hour, a little cryptic & eerie following this month's theme. This mix features five tracks from Brokntoys (including relatively new pieces by Barking and Champagne Mirrors) and two from Bass Agenda. Plus, of course, a bunch of old and weird tunes.

Mix will be late this week. I'll try to have it up Friday afternoon PST. I've got the first half of it worked out, need to do the second.

We continue the spooky theme from last week with more electro, this time at ~130. This mix features three tracks from Brokntoys, two from TRUST, and two from Touchin' Bass. A lot of strong pieces here, tracks I've been playing for a long time.

Streaming a few hours of Shadowrun: Dragonfall before I go to sleep. Mixture of reading to myself & turn-based RPG combat.

I'm continuing Shadowrun: Dragonfall on stream tonight at https://twitch.tv/andreaen. Will play through one or two missions tonight. (Stream will mostly be me reading out loud to myself I think.)

Starting up a #quake1 stream, continuing the DM4 Jam from where I left off last week. (Meant to finish it earlier ha ha). Will do something more after.

A video breakdown and re-creation of the Good Looking Records sound I saw linked on reddit. Watched today & really enjoyed it. I'll have to watch Groovin' In G's other Renoise videos.

Spooky electro around 135 BPM. Tracks are good, set kinda wanders, gets crunchy at the end. This mix features three tunes from Brokntoys and two from Drivecom plus new-ish pieces by Lectromagnetique and Serge Geyzel.

Mix will be up mid-day tomorrow (Friday). I spent all day working out a tracklist, finally settled on one a few hours ago & ran out of energy.

Couldn't make it good enough to meet my standards in time.

the DM4 Jam is really good. Played 12 or 13 maps tonight, a little over half the pack. I'm liking it a lot.

Streaming the #quake1 DM4 Jam map pack tonight at https://twitch.tv/andreaen. Will get to some Shadowrun Dragonfall later if I can (DM4 pack might be long). 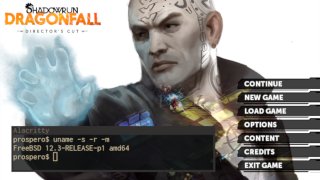 Writing to report that the Harebrained Schemes Shadowrun games (Returns, Dragonfall, and Hong Kong) all run under FreeBSD. I got them working by following the Linux Binary Compatibility chapter of the FreeBSD Handbook (using the CentOS base system linux-c7 as instructed by 10.3) and then installing the linux-nvidia-libs package to support my graphics card. After that I was able to directly execute the Linux binaries downloaded from GOG. (This configuration is, of course, not officially supported by anyone. I got it to work but I can't guarantee that it'll work for anyone else.)

I like these games a lot. They're an interesting combination of tactical combat RPG and '90s Shadowrun novelization. The second one, Dragonfall, is my favorite of the trilogy, I think it has the best balance of those elements. I've had a rare crash or two while playing Dragonfall but otherwise all three games run flawlessly for me.

The latest episode of the Backlisted book discussion podcast is about Roadside Picnic by the Strugatsky brothers. Listening to it now. I very much need to get to Roadside Picnic, it's been on my to-read list for a long time.

Streaming a bit of Shadowrun: Dragonfall tonight at https://twitch.tv/andreaen. Going to spend some time reading to myself and then do some tactical combat badly.

Streaming the #quake1 Halloween Jam 2018 tonight + maybe Shadowrun Dragonfall later if I have the energy https://twitch.tv/andreaen.