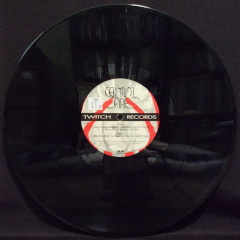 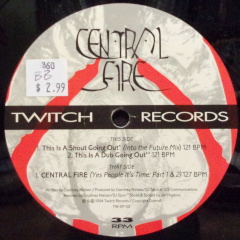 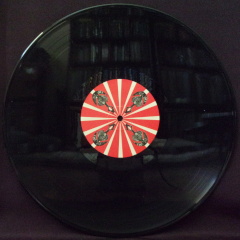 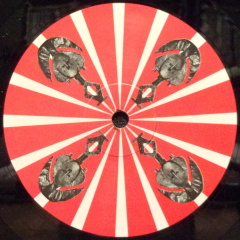 This Is A Shout Going Out by Central Fire. Written by Courtney Nielsen, produced by Courtney Nielsen & DJ Spun (Jason Drummond). A2 sliced & spliced by Jim Hopkins. First released on Twitch Recordings in 1994, remastered and reissued by Mint Condition in 2022. Vinyl, 12", 33 RPM. Flac, 16bit/44.1khz, 161M. Tracklist and credits from the label artwork. Track durations, file size, bit depth, and bitrate are of my stored recordings of the 1994 vinyl.

Three tracks of acidic west-coast USA breakbeats. (Four tracks if you, like me, count side B as two separate pieces). More groovy and steady than harsh. This is a well known classic, the second release in an incredible three record run on Twitch Recordings. The first of that run being The Trip by Ultraviolet Catastrophe and the third is Loose Caboose by Electroliners.

The record is pretty consistent across all tracks - same tempo, similar beat, same overall production. Both sides feature a vocal hook ("this is a shout going out", "yes people it's time") and dubby FX (delay, flanger/phaser, reverb). A1 starts with a bubbly acid line and cycles through a few additional acid sequences. A2 is an edit, a cut-down version of A1. Side B features flute & guitar and ends with a heavily flanged drum & synth sequence. That's my favorite part, the end of B, it's wildly dynamic and trippy.

As mentioned above this is available now, vinyl and digital, from the Mint Condition reissue label. The individual tracks have been uploaded to youtube multiple times as well of course (a quick search there and you'll find 'em). I last played it myself for MTT 269.

This is an essential piece of '90s breakbeat & a record I've always really liked. I say pick it up while you can, it's great.