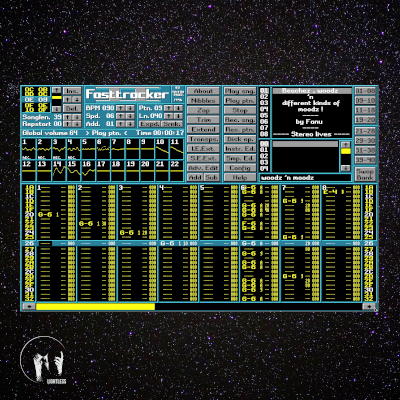 Tracklist below is from the bandcamp release page. Bit depth, bitrate, filesize, and track durations from my downloaded copy. BPM I tap-tempoed myself (and is probably inaccurate).

The first four tracks on this comp are relatively traditional drum & bass. Woodz 'n Moodz, Black Velvet, and 2000 Years are atmospheric pieces with playful drum programming, "intelligent" DnB of the kind I associate with Good Looking or maybe the Artcore series of ambient jungle compilations. (The kind of thing I generally like to listen to and play). The drums in Eklipz are a bit more tough, the bass a bit darker, than the previous three, though the smooth pads bring it around and even it out. Good stuff.

The next three are chunky downtempo / instrumental hip-hop bits. Faded head-nodding music, something Fanu is great at. Silent Resistance features some piano with delay and a beat; Steppin' is a hypnotic, sedate tune; Nighttime In The North sounds like a drive or a walk at night down a dimly lit street & is my favorite of these three.

Pimeys, the final track on the comp, is more in line with what I expect from late '90s tracker weirdness. Hazy somewhat lo-fi samples, sine or tri bass, a heavy beat played at the standard 125 BPM. A nice tune.

As I mentioned above most of these songs were released in tracker module format (specifically Fasttracker 2 .xm) in 97-99 on Most Valuable Playaz. I first encountered them in that form a year or two ago while digging through files.scene.org. They've been adjusted slightly for this compilation - the volume levels seem more even and I hear a little EQing. This is the best these tracks have sounded, I think. (Not having to dig through scene.org for days to find them is a plus, too).

Old Tracker Stuff can be found now on Fanu's bandcamp page. I've played a few of the tracks from it in recent mixes, notably Pimeys in number 256 and Black Velvet in 266. As a last word I've got to say it makes me really happy to see an artist acknowledge their old tracker work, thanks for that Fanu.