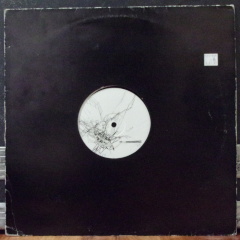 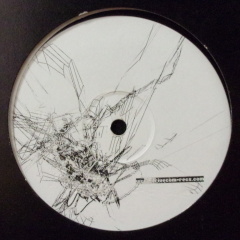 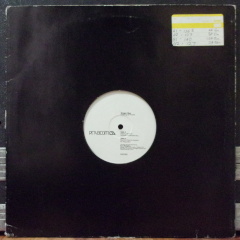 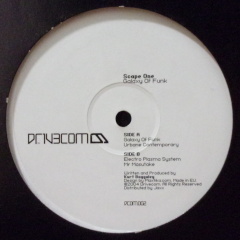 Galaxy Of Funk by Scape One. Written & produced by Kurt Baggaley, design by Plaxtika.com. Released on Drivecom Records in 2004. Vinyl, 12" 33 RPM, cat# dcom002. Flac, 16bit/44.1khz, ~138M. Tracklist and credits from the label artwork. Durations & file properties are from my stored recordings of the vinyl. BPM I tap-tempoed (and is probably wrong).

A1, the title track, is frenetic and bleepy and zoomy, a sci-fi soundscape to match its name. A2 Urbane Contemporary is the outlier of the four, it's buzzy, full of attitude and swagger. B1 Electro Plasma System is the quickest here and features a few rolling bubbly synth lines. B2 Mr Masutake has many similar zooms and bleeps as A1 but is slower, less frantic, and has a nice uplifting echoey synth sequence. A1 and B1 sound like live jams to me (and according to Scape One's short description of the album at his bandcamp that's what the whole release is).

I've always really enjoyed this EP for both casual listening and playing in mixes. I like the energy of it, it's lighthearted and playful electro, something I could use more of. The vinyl copy I have sounds good to me and it's easy to work with. It's one of my favorites of Scape One's voluminous output. (He's not quite as prolific as say Pete Namlook but it's a lot).

Galaxy Of Funk is available from both Drivecom's bandcamp and Scape One's bandcamp. The latter version is a remaster that comes with extra mixes and alternate versions. All four tracks are also on youtube. Used vinyl copies can be found on discogs of course and (if you're lucky) you might come across one at your local used record shop.

Give this a listen if you haven't heart it before (or haven't heard it in a while), it's great.